2020, ironically a year that has  brought its numerical  acuity of perfect vision to the forefront of so many areas of corruption in the United States, and abroad. We are experiencing a Great Awakening, one that has Patriots all across these United States researching and investigating to know the truth, and to expose those who have been working to tear down our country for decades, and maybe, no…probably even longer.

The MSM, also known as the Legacy Media giants, along with the Big Tech conglomerates have lost all credibility of being for Free Speech and reporting facts to the American people, or the world.  It is obvious to anyone who chooses to look at things logically, that these companies are corrupt to their core and are nothing more than a weapon being used against our Republic, our Freedom, and all that any moral person holds dear in their life. They have dug in deep with corrupt politicians, evil foreign agents, and many far left wing extremists to sway public opinion, to censor truth and conservatism, and to stomp on anyone or anything that doesn’t surrender to their agenda.

For me, it wasn’t until 2020 that I really was able to put a lot of the pieces together and just how bad the Deep State players were woven into the plan of destroying this Nation.  What may be news to those who begin coming to this site, I have spent the last 6 to 7 years of my life teaching the bible from its ancient near eastern context. Which means, the focus was trying to figure out the context of Scripture from the actual time in which it was written to the people. This is accomplished by studying the legality to ancient documents, researching the cultures of the day, putting yourself into the mindset of the person or people that were the ones that the message was actually written to. When you do this, many many more areas of Scripture begin to become more clear. The context of any situation helps establish a firm foundation for truth. I personally believe that God had me on this journey of learning, and teaching the Bible first, before He led me to see the things I am seeing now in our own lifetime.

One of the very first areas I personally began investigating a few years back, like so many others, was wanting to know why the Left hates President Trump so passionately. Why did they go after him with the Russian Hoax? Why did they concoct such an evil scheme against him, his family and his Presidency? Was it just because he was an outsider and not a politician wading in the DC Swamp?

When you begin to ask questions like these, you have to back to the beginning to find the context. Context leads to facts, and facts leads to truth. One of those beginning pieces to all of it was the first person they targeted, The People’s General,  Michael Flynn. Barack Obama named General Flynn in the same sentence as Kim Jong un as the two most dangerous men that President Trump was to be watchful of. I believe that at the time this was stated, the plan to go after General Flynn was already underway. What they did to this American Hero and his family for 4 years is nothing short of a disgrace. There will be many more posts and podcasts on General Flynn and his endeavors up to his freedom, along with his continued efforts in restoring the Republic. For now, in the inception of this new alternate truth resource, The Daily 302 name has been inspired by General Flynn’s journey and the missing FBI 302 form from his initial interview. While the FBI 302 form is meant to be a hand written telling of truth to FBI interviews at the time in which they occur, it has become more clear that is not the case in many instances. They even go missing, as in General Flynn’s case. While we may never know what happened to that 302, we at The Daily 302 are committed to uncovering the truth, at all cost. 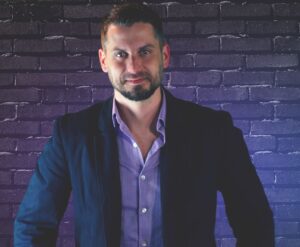 The Daily 302 is not a news site. It is and will always be a resource for truth. This outlet will focus on bringing you accurate intel and commentary to the topics that so many of us have been kept in the dark on for decades. Alternate Media is already growing, and as  God has blessed us to live in this country that is based on biblical values and freedom, we must  be a light in a world full of darkness.

Host and Cofounder of The Daily 302. Follower of God, Yeshua and the Torah,  Loving Husband, Father, Patriot, Digital Soldier.